Chelsea Nostalga - The Run in to the 2004-5 Premiership Win 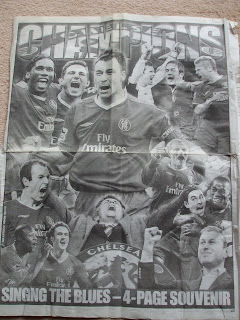 The First Title Win for 50 years was always going to be Special and in Chelsea's Centenary year, it was our destiny, any title win after that would never be as special, we had the League Cup in the cabinet but that would never be enough for Mourinho the Special One.Roman Abramovich had the money to make our dreams come true but Mourinho made it happen. 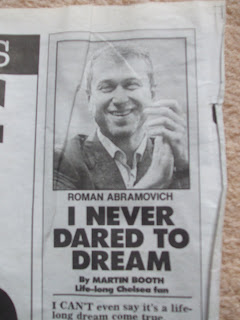 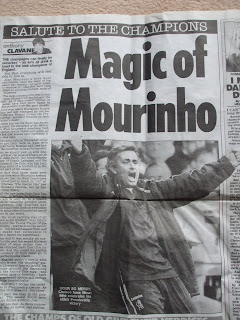 Even more special for the fans who remember over 35 years ago when Chelsea failed to beat Everton and were relegated to the old Second Division and celebrated narrowly escaping relegation to the Third, a year later. Then suffering as they went down twice more later on, one of the lowest points being beaten by Leyton Orient in 1982 in front of 6007 fans.
Thats why watching us running around the pitch in 2005 with that gleaming trophy ment so much to us older fans it brought a lump to your throat, like beating leeds in 1970 when i first started watching Chelsea, I lived in Leyton at that time and we were only aloud to watch football if Orient was on, of course mum was told they were playing every time.


Enjoy Here Now the Run in to the 2005 Win
Now we demand to win it every year and we did the next season but it was never as sweet as 2005. 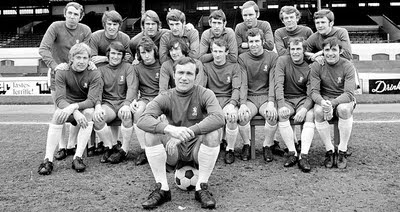 In 1970 we reached the FA Cup Final once more, this time against Leeds United - the reigning League Champions and the best team of the era.

Leeds rarely took prisoners and although Chelsea had style and poise, we weren't a team to be bullied either. It was to be a titanic battle.

Leeds twice took the lead on a pitch that shamed Wembley's reputation but each time Chelsea showed enough steel to equalise. For the first time in a Wembley Cup Final, the sides could not be separated on the day.

The replay was at Old Trafford and was a ferociously fought and at times brutal game. Chelsea again came from behind to take the game into extra-time before Hutchinson's long throw found its way to Webb's head and Leeds were a beaten outfit.
Osgood had scored in every round. After three finals and seven semi-finals, Chelsea had at last lifted our first FA Cup. We also finished third in the League for the second time in our history.

Cup victory brought qualification for the European Cup Winners' Cup. Man City were beaten in an all-English semi-final to take Chelsea to Greece for the Final where the legendary white shirts of Real Madrid awaited.

With Hudson and Cooke inspired, it was Chelsea's turn to take, then surrender a lead, Madrid battling back to score a cruel equaliser in the dying seconds. Extra-time proved goalless and suddenly the army of Chelsea fans were making plans to stay in Greece another two days.

They were not let down. Dempsey scored a rare and spectacular goal in the replay, added to by Osgood. Real Madrid pulled one back late on but this time there was no slip-up. Chelsea's first European trophy was flying back home.

Stamford Bridge was no longer a home fit for returning heroes. Time had long moved on since the days when it was the finest sports venue in London. The club began to build a new 60,000 capacity stadium to match any but sadly the timing was poor and the plans flawed.

The first stage - a new East Stand - was hampered by a multitude of problems and was completed a year late and a massive £1.3 million over budget. Debt was a new and dangerous opponent.

Problems were arising on the pitch as well. An all-time European record aggregate score of 21-0 was set against a team from Luxembourg as the defence of the Cup Winners' Cup began but we were eliminated next round by little known Swedish outfit Atvidabergs. And although another Wembley cup final was reached - the 1972 League Cup - unfancied Stoke City won the day.

By 1974 rifts between Sexton and two of his stars, Osgood and Hudson, were beyond repair. Both were sold as initially the board backed the manager - but when the next season began badly too, they sacked him.

Just four years after the European triumph, Chelsea were relegated to Division Two. With the debts greater than £3 million, it was an incredible decline.

Eddie McCreadie, left-back during the recent success took over and the lack of money gave him no choice other than to field homegrown youngsters plus a few old hands still around - Harris, Bonetti and Cooke. Against the odds it came together well and within two seasons, Chelsea were back in the First Division. Ray Wilkins, captain at just 18 was the new hero of the Bridge.

Yet no sooner had the step forward been made than another big one was taken backwards. McCreadie walked out after failing to agree personal terms on a new contract.

Sixteenth place that first season back was followed by bottom spot the next. As Chelsea dropped down a division again, Wilkins was sold to Manchester United to ease the financial crisis.

Creditors were howling at the door as three managers in four years, Ken Shellito, Danny Blanchflower and Geoff Hurst, failed to revive fortunes.

Posted by Colin Marriott Aka @The_ChelseaBoys on Twitter at 15:10